The female history behind the Royal Hospital Chelsea

The Royal Hospital Chelsea houses over 300 Chelsea Pensioners. Both men and women reside there, however it’s not always been that way…

The Chelsea Pensioners seem to come with two things; red coats and a male energy. Though it was opened in 1692, female pensioners have only been allowed in as residences since 2009. It was created to act as a retirement home for solders after the civil war, who at that time were strictly men only. Despite it’s male-centric history, it is believed that the Royal Hospital was actually inspired by a woman. It seems that King Charles II’s mistress Nell Gwynn was the one who came up with the idea of setting up the institution. Rumour has it that she requested a piece of land as big as her handkerchief for the site… which she then spread onto a map of London in the location the Royal Hospital resides in now. Genius.

Other women who have featured in the history of the Royal Hospital include Christian Davies and Hannah Snell, who are buried in the grounds. In the 17th and 18th century they disguised themselves as men and fought in the Army, thus earning themselves a pension.

Mary Astell was thought to be one of England’s pioneering feminists, and published her desires for female education in an essay in 1694. In the early 1700s she took this one step further and decided to set up a school for girls in the grounds of the Royal Hospital, teaching the daughters of the Chelsea Pensioners.

Today the hospital homes over 300 military retirees, men and women. 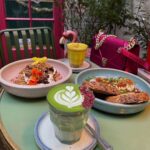