Diana has had quite the journey over the past months to land here in the Georgian on the High Street. We are grateful she has arrived safely.

Originally from Kharkiv, Ukraine’s second-largest city in the northeast, it has been a strong target for Russian forces. Diana was forced, with her friends and family, underground for several weeks whilst the worst of the bombing occurred overhead. Thankfully Diana and her mother both managed to escape- her mother to another European country and Diana to England where her father lives and works. Diana had to leave her friends and the majority of her family in Kharkiv, which is still under bombardment from Russian troops, to make the solo journey to the UK. From our cosy Clapham homes, it is hard to fathom the bravery that must have taken.

It was her father that allowed her passage through to the UK due to the restrictions on the government scheme. It was also him who was the inspiration for the job at the Georgian, which is also where he works. Diana started last week and will be working part-time in the kitchen and on the floor helping to serve up the Georgian’s delicious menu.

Alongside working at the Georgian she will be learning English at Lambeth College (the government are making sure that any refugee under 18 years old gets a free education). Currently, Diana is still learning the language, so be patient if you visit the Georgian. We love the support that our local businesses are giving to those fleeing the awful situation in their hometown and they deserve our support too. Head down- give the Georgian and Diana some love. 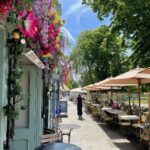 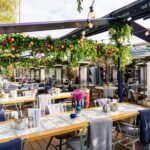 The Terrace by Megan’s gets a summer glow-up